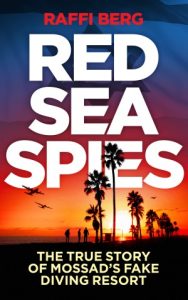 In the ear­ly 1980s, on a remote part of the Sudanese coast, a new lux­u­ry resort opened for busi­ness. Cater­ing to divers, it attract­ed guests from around the world. Lit­tle did the guests know that the staff mem­bers were under­cov­er spies, work­ing for the Mossad — the Israeli secret ser­vice. Writ­ten by BBC News web­site Mid­dle East edi­tor Raf­fi Berg, this page-turn­er tells the true sto­ry that inspired the recent Net­flix dra­ma The Red Sea Div­ing Resort.

What began with one cryp­tic mes­sage plead­ing for help, turned into the secret evac­u­a­tion of thou­sands of Ethiopi­an Jews and the spir­it­ing of them to Israel.
Raffi Berg is the Middle East editor of the BBC News website. A journalist for nearly 30 years, he has a particular interest in events in Israel, from where he has reported extensively in times of war and peace. He graduated in modern and medieval history from the London School of Economics and was a student of Jewish and Israel studies at the Hebrew University of Jerusalem. Raffi’s book Red Sea Spies: The True Story of Mossad’s Fake Diving Resort is his literary debut, written in collaboration with the Mossad commander behind the epic operation to spirit Ethiopian Jews to Israel. Originally from north-west England, Raffi is based in London, where he lives with his family.